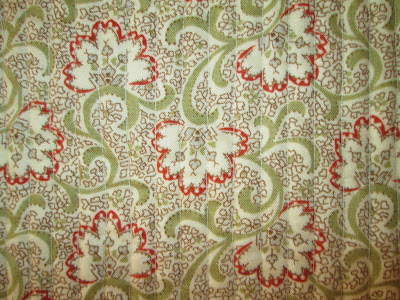 Some of my project plans originate in my having some supplies sitting around that I want to use up, and some come into being because I need a particular item. In this case it was a matter of both, which is the ideal scenario.
Back in 2012, I came up with a hare-brained plan to make a long velvet coat, and I bought the pattern, the velvet, the lining, the Thinsulate interlining, and even the thread and buttons for it. Then I put off actually making the project for years as I came to the slow realization that it wasn't a good idea, that the coat wasn't going to be warm, that the velvet was too fragile for outerwear, and that I would have very few occasions to wear such a coat. I bought more supplies and made myself a far more serviceable long tweed coat. But that ill-advised velvet coat plan left me with a lot of supplies to use up in some other way. I've made a long skirt out of the beautiful printed velvet and have specific plans to make a few more velvet items (I'll be posting about them all in a single post once they are done), I'll eventually use the buttons and lining for something, but what to do with the Thinsulate was a knottier problem. There was so very much of it -- besides what I'd bought for the coat, I also had quite a bit left from another project I made years before. I'd have to make a number of coats or puffy vests or whatever in order to use it all up, which would be expensive, and what would I do with them once they were done? I didn't need them, and none of the family members and close friends with whom I exchange gifts did either. I faced a future of making puffy vests for everyone I knew, and I didn't like the prospect at all.
It wasn't until the fall of 2019 that I had a eureka moment. I'd recently cleaned out the blanket box in the attic and been reminded again that I had so much Thinsulate to use up. Just a few days later, when I was vacuuming around the the blanket box and thinking ruefully again about all that Thinsulate folded away inside it, I finally hit upon one of those solutions that seem so obvious in retrospect: I really needed another warm blanket for my bed, and I could use the Thinsulate to make a quilted blanket.
My first step in this plan was to get out the Thinsulate and lay it out and make sure that I had enough for a quilted blanket big enough to fit my queen-sized bed. And I did indeed. After I'd cut and pieced the lengths I wanted for my quilted blanket, I had enough left over to make a 4' x 6' throw-sized quilted blanket, which would make a nice gift for someone, and I tucked away the rest of the Thinsulate, happy to finally have a plan for it all.
Then in late November 2019, I went shopping for quilting fabric. You can see the print I chose above, a poppy-like fabric with Art Nouveau-ish curves that I thought would accord well with my planned poppy and Art Nouveau-themed bedroom refresh. All things being equal, it would have been my preference to make the entire blanket in this print, but I went with a plain ivory fabric for the backing because it was $6/yard -- compared to the $10/yard price of the print -- and it kept the project cost down somewhat. 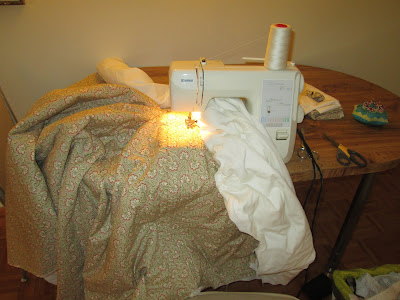 I don't remember quite when I began sewing. I had never done any quilting to speak of and was a little intimidated, but I think I took the initial plunge in January 2020, and I began quilting the blanket in vertical lines 3/8" apart. The finished size of the blanket is 78 x 83.5". That's 208 lines of stitching -- and I think I did a few more that got trimmed off when I evened up the edges. It was one of those situations where I didn't entirely realize what I'd gotten myself into until it was too late to get out of it. It soon became apparent to me that I had signed up for a LOT of repetitive work, which I quailed from doing. It wasn't until the pandemic hit in March 2020 and we were all told to stay home as much as we could that I really settled into the work of stitching all those lines, and suddenly I was obsessed with the project and it was all I wanted to do. I had to ration myself to do a certain number of lines a day (which I often mentally compared to doing lines of cocaine) because I needed to reserve some time and energy for other things, and because wrestling the thing into place and holding it there as I worked put a strain on my back.
And I couldn't understand why I was suddenly so consumed with this project until one day it dawned on me. Does the print remind you of anything? Something that's been much in the news this year? 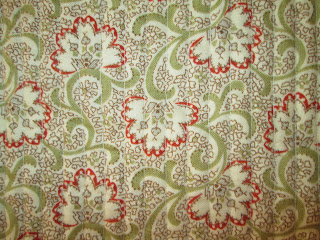 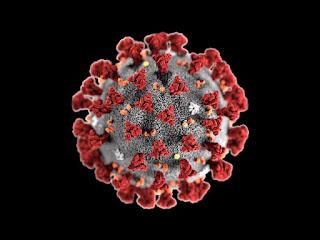 Does it remind you of anything now? Yes, that's right, readers, I spent a good part of the COVID19 pandemic obsessed with making a coronavirus quilted blanket. Before anyone pyschoanalyzes me and says I chose the pattern out of some sort of unconscious desire to sublimate my fear of dying, my credit card statement for December 2019 shows that I bought the fabric for this project on November 29, 2019, before the virus existed. It was simply a coincidence... a very freaky coincidence.
Then, deciding to truly embrace my pandemic experience, I created a special quarantine playlist, which I played while I was working on the quilted blanket. Since we're not out of the woods yet, I thought I would share it with you, on the chance that you might share both my twisted sense of humour and my middlebrow musical tastes: 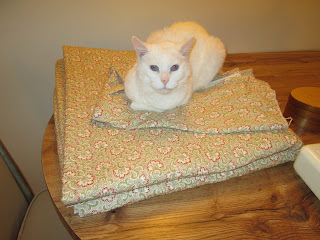 My cat Trilby did his part to help me with this project by test-napping the quilt before it was bound. It seemed to pass muster. 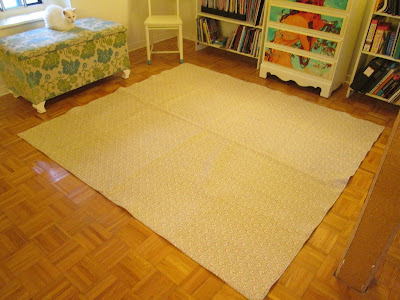 Here is the finished quilted blanket in all its glory. Trilby, who is sitting on the blanket box, looks unimpressed, but we're just going to ignore him. Whenever I am working with fabric on the attic floor, he's fond of playing a game I call "cat surfing", in which he takes a running leap onto a large piece of fabric and uses his momentum to "surf" across the floor on the piece of fabric, and it was a big disappointment to him that this blanket was too large for him to take for a feline-style magic carpet ride.
I finished the body of the quilted blanket in early April, but then it sat for some months while I tried to get myself to work on the binding. I'd never bound a quilt before, and I tend to postpone things that I am not sure I can do. But finally in early September 2020, I made myself do it, and as usually happens when I've been putting something off because I dreaded it, found it wasn't nearly so difficult or unpleasant as I expected. These Craftsy tutorials on calculating the amount of quilt binding needed and on binding a quilt were very helpful. 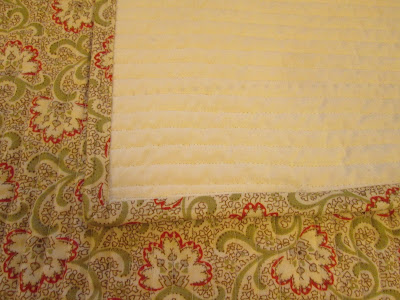 I should have stitched the underside of the binding by hand, but cheated and did it on the machine. I would never want to show this project to an expert quilter because it is definitely the work of a novice. The binding, besides being machine stitched, is uneven in places, and there is a place on one corner of the body where my lines of stitches, which are supposed to be straight up and down, take on a definite curve. But it's done, it's a nice-looking piece on the whole, it should last a good long time, it is lightweight and flexible, it should be warm, and I will be using it as a blanket not a bedspread, so the flaws in it won't matter much.
Whenever anyone asks me if there's any kind of needlework/textile crafting I don't do, I say "I don't spin, I don't weave, and I don't quilt". I've never had any real interest in quilting. I don't particularly like the look of quilts -- my tastes aren't Victorian or country -- and quilts don't stand up too well to being washed. I can't say this project changed my stance regarding quilting. I am glad I made this one, as I really needed a warm blanket for my bed (I've been piling several afghans on my bed during very cold winter weather in order to stay warm enough at night), and it's so good to have that Thinsulate finally put to good use. I also learned a thing or two about making and applying binding that will likely come in handy in future non-quilting sewing projects. But I'm not sure if this project quite qualifies as a real quilt; I would describe it (as I have done in this post) as a quilted blanket. So, despite my experience with this project, and despite the fact that I will be making a 4' x 6' quilted blanket within the next year to use up what remains of the Thinsulate, I'm still not a quilter.
Posted by Orange Swan at 2:36 PM 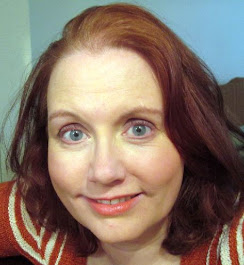